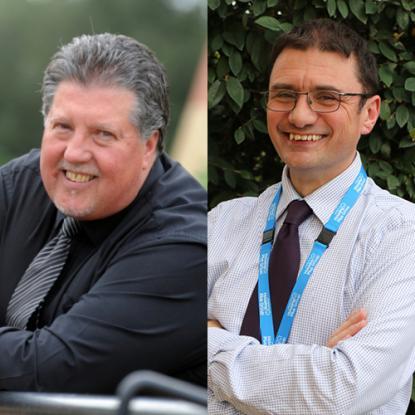 Two employees of Housing Plus Group have been named in the new 40 over Forty list, published by 24Housing magazine. Employment and money advice officer Colin Spires and procurement and value manager Matt Akers are both included in the chart spotlighting people who have changed the lives of tenants, inspired their colleagues and transformed the way that organisations work.

The magazine said that it wanted to highlight housing professionals who make a difference. Their annual top 40 list was published on 1 November.

Leaving school at 14, Staffordshire-based Colin Spires started work in the local coal mine and went on to specialise in mining construction, using explosives and powerful drills to blast through rock and reach the coal beneath.

A battle with throat cancer brought a change of career.

“I couldn’t speak for four years. Eventually I began volunteering with Citizens Advice and then became an employment and money advice officer with South Staffordshire Housing Association, helping people deal with debt, unemployment and benefits problems.”

Colin used to blow up mountains. Now he moves mountains for tenants who are often at their lowest point.

“I wanted to reinvent myself but I found someone different. I meet people worrying about money, frightened they will lose their home. I know how it feels to be powerless, to have everything taken away. I can keep people in their home; help them to turn their life around. How could there be a better job than this?”

Matt was initially employed on a two-year fixed term contract, challenged with saving two per cent of the association’s turnover through better buying.

He’s continued to deliver annual savings of around £200k, something which became even more vital to maintaining essential services in the face of the rent reduction imposed by the Welfare Reform & Work Act 2016.

“There are always opportunities to buy better – I try to do that at home, too. Just like at home, quality is equally important. If you buy cheap, you often end up buying twice. I’m proud of the quality we deliver and what that means for customers.”

We’ve made some important changes to our privacy notice. To find out more, visit our data protection pages.